Heliod Company is a creature combo deck supported by synergistic creatures. It is well-positioned, as not many decks have a way of beating infinite life, especially aggressive decks and combo decks that can only deal a finite amount of damage.

This deck utilises the power of Heliod, Sun-Crowned from Theros: Beyond Death to create infinite combos with Spike Feeder and Walking Ballista. 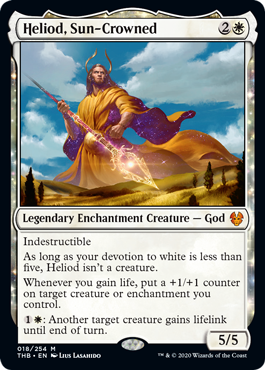 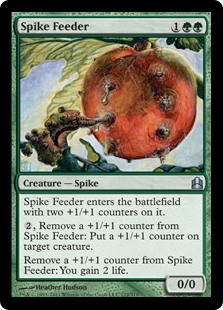 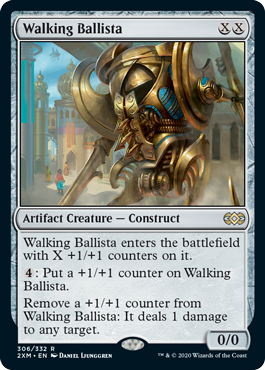 With both Heliod, Sun-Crowned and Spike Feeder in play, use Spike Feeder’s ability to remove a +1/+1 counter to gain 2 life. This will trigger Heliod’s ability and put a counter on any creature, pick Spike Feeder and continue this loop as many times as you like. Generating infinite life for the win.

This combo is harder to assemble as it requires more mana and cannot be found instantly with a Collected Company, but the deck is built in a way to support this combo.

Let’s have a look at the deck:

As this is a Collected Company deck, the creature count in this deck will be higher in order to maximise value when you cast the eponymous spell.

Arbor Elf is a mana accelerant that helps to cast the three-drop creatures of the deck a turn earlier. It also synergises well with Utopia Sprawl, one of the best mana accelerants available in Modern. A turn one Arbor Elf followed by a Utopia Sprawl provides you with 4 mana on turn 2, enough to cast a Collected Company. 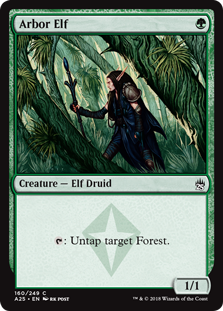 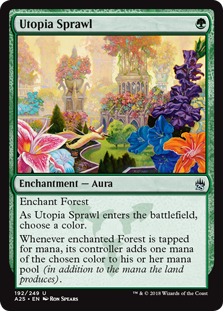 With a creature-based combo, naturally, the opponents would try to break up the combo with removal. Giver of Runes provides protection for the combo.

Auriok Champion may initially seem out of place in the main deck, however the life gain triggers from creatures entering the battlefield work well with Heliod. 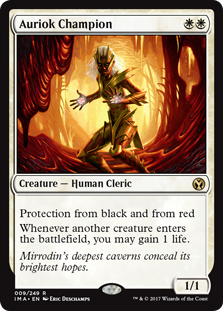 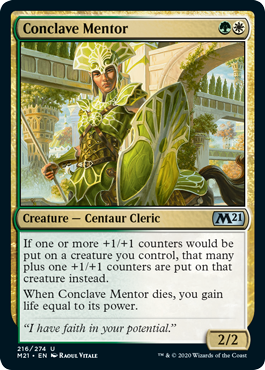 Ranger-Captain of Eos is a very versatile card. It enters and searches for a one-drop creature. Whether it be protection in Giver of Runes or a combo piece in Walking Ballista. As a 3/3 it is a decent blocker and can buy you time against aggressive decks. Against removal and counterspells sacrificing it will give you the turn to combo off care-free of noncreature spells. 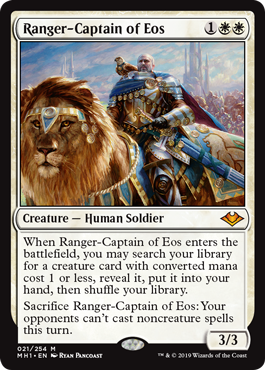 Skyclave Apparition deals with a range of troublesome permanents in Modern. It fits well into the deck, being able to put it into play from a Collected Company and remove a permanent instantly.

Modern Horizons brought Eladamri’s Call into the format, as the combo pieces are relatively low cost, Eladamri’s Call can search for the missing piece. If there is concern over a removal spell, searching for a Ranger-Captain of Eos is a great option. It can find Walking Ballista and stop noncreature spells with its activated ability.

Eladamri’s Call improves post board as you can find sideboard silver bullets with it. 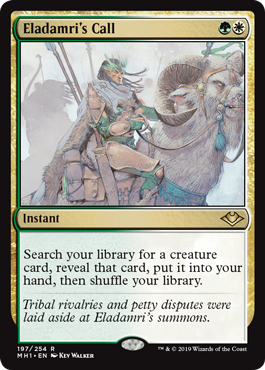 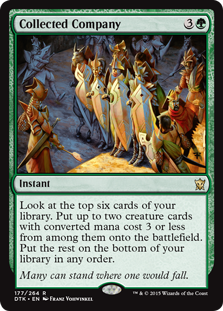 The mana base for the deck is pretty straight forward: A mix of lands that can ensure you are able to cast your double green and double white spells.

Windswept Heath is your best fetch land being able to find either of your basics. Wooded Foothills acts as an additional green fetch land to find the Forest or Temple Garden.

Basic Forest is the best target for a Utopia Sprawl as there are fewer cards that destroy Basic Lands as opposed to nonbasic lands. 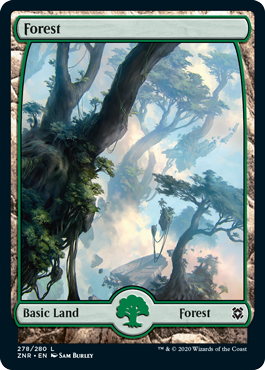 Pendelhaven does a great job of protecting Arbor Elf from Lava Dart and Wrenn and Six, but it can also play a role in the combo.

While comboing off with either Spike Feeder or Walking Ballista, leave Pendelhaven untapped.

You will need to remove a counter from either Walking Ballista or Spike Feeder to initiate the combo, which will bring your creature’s power and toughness to a 1/1. If your opponent were to use a removal spell, you can use Pendelhaven to buff your combo creature to a 2/3 and then remove another counter in order to force the combo again.

In the same way, Pendelhaven can be used aggressively to force the Heliod Ballista combo. With a Heliod and 5 lands in play, one of which being Pendelhaven. Play Walking Ballista for 1, activate the Pendelhaven to buff it to a 2/3 and then give Ballista Lifelink, then shoot repeatedly.

Gavony Township works well with a Conclave Mentor, as it would allow Township to give all your creature 2 +1/+1 counters. In a few activations, it can turn an Arbor Elf and any other smaller creatures into considerable threats. 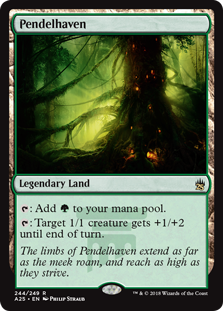 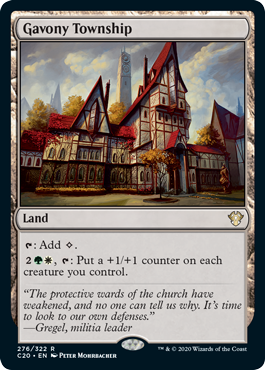 One of the best creature removal spells available in Modern, Path to Exile removes aggressive creatures that can pressure your life total while you’re still setting up your combo.

Veil of Summer protects your hand from discard spells, so that combo pieces and Collected Company won’t be discarded. It also protects your permanents from targeted removal and can be used to ensure a combo piece cannot be countered. 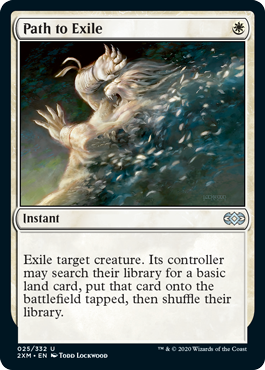 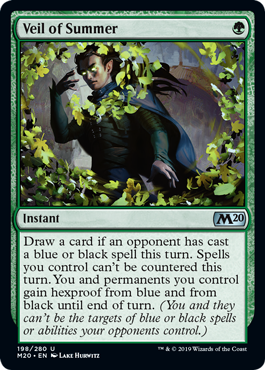 Damping Sphere is a flexible sideboard card, slowing down decks like Tron and Amulet which produce multiple mana off one land. It can also be brought in against spell-heavy combo decks like Storm.

Rest in Peace comes in against graveyard strategies and combo decks like Dredge and Oops all Spells. It also hinders the [HYPERLINK]Uro control decks enough to warrant bringing in, stopping Uro and the Cryptic Command and Mystic Sanctuary loop until dealt with.

Choke is further anti-control insurance, ideally stopping them from untapping all their lands. But does a great job buying you time or burning their counterspells. 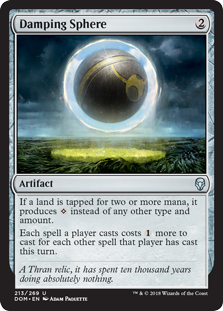 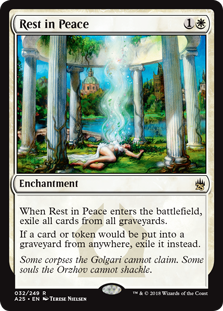 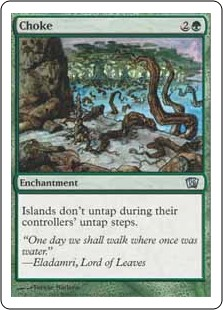 Archon of Emeria comes in against decks with a high number of nonbasic lands and those looking to cast multiple spells in one turn like Prowess. Slowing those decks down until they deal with the Archon.

Aven Mindcensor is primarily used against the Primeval Titan land decks, that rely on finding specific lands like Valakut, the Molten Pinnacle and Field of the Dead. Having an Aven Mindcensor in play significantly reduces their chances of the specific land required. Aven Mindcensor can also be brought in against Uro control decks as they have a high fetch land count, due to Omnath, Locus of Creation and Mystic Sanctuary.

All of Knight of Autumn’s abilities synergise with the deck. Dealing with problematic artifacts and enchantments, gaining life against aggressive decks and triggering Heliod or creating a blocker with +1/+1 counters that can be increased with Conclave Mentor. 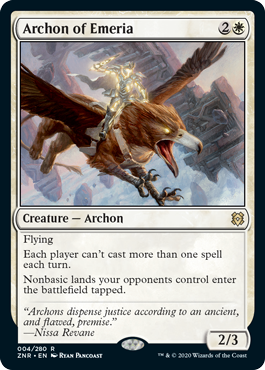 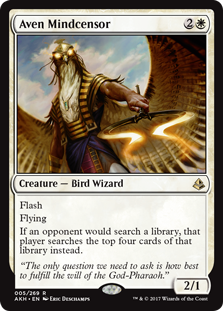 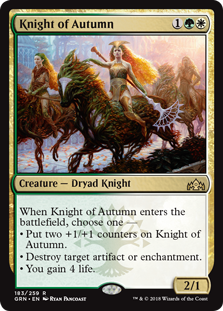 The ideal hand for Heliod Company would contain the namesakes of the deck; Heliod and Collected Company, along with a mana accelerant,  two lands (one of which being a Forest), one of your two-drop creatures in Auriok Champion or Conclave Mentor, and a Ranger-Captain of Eos.

Leading with the mana accelerant will set up to play a turn 2 Heliod. Followed by a Collected Company the turn after, which should increase your board presence. The turn after you can play Ranger-Captain of Eos which will find Walking Ballista. On turn 5, sacrifice the Ranger-Captain to ensure your opponent cannot disrupt your combo and play either Auriok Champion or Conclave Mentor and then Walking Ballista, which will gain an additional counter. Then give it lifelink and start pinging.

Heliod Company is a combo deck that has adapted well to the current Modern metagame. It stops aggressive and combo in their tracks by gaining an infinite amount of life. The creatures are versatile enough to protect the combo and synergise with it, occasionally turning into a beatdown deck.

If you miss the Heliod Ballista deck from Pioneer or casting Collected Company, this is the Modern deck for you.

Just make sure to bring some dice for all the counters!