Since the resumption of organised play, which has coincided with the banning of Arcum’s Astrolabe, I’ve picked up a new modern deck, Izzet Blitz.

An aggressive deck that uses spells to synergise with the Prowess creatures of the deck. This archetype has been bolstered with the recent additions of Stormwing Entity (M21) and Sprite Dragon (Ikoria). 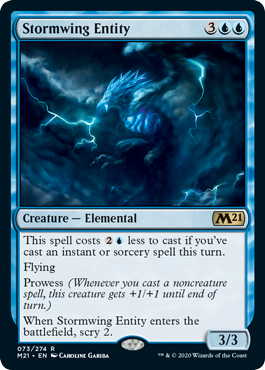 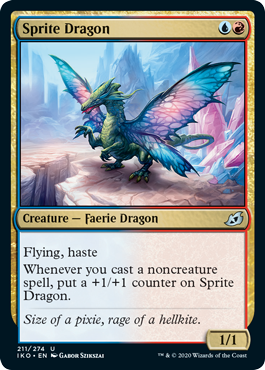 Here is the list I have ended up with after a month of testing:

3 Light Up the Stage

The creatures in this deck have the Prowess mechanic or pseudo-Prowess in the case of Sprite Dragon. In combination with cheap spells, multiple Prowess creatures can deal lots of damage in one turn. The printing of Stormwing Entity has stamped this deck’s place in the metagame, with a converted mana cost of five which dodges one of Modern’s premier removal spells in Fatal Push, but being able to be played on turn two with the help of Phyrexian Mana spells (Gut Shot, Mutagenic Growth) or Manamorphose. It also has evasion in Flying. If left unchecked the game will end very quickly.

The spells in this deck fall into two categories: damage and refuel.

Damage is pretty straight forward.They are used to remove blockers in your way or go straight to the face to diminish your opponent’s life total as quickly as possible.

Lava Dart is one of the best spells in the deck, by having Flashback it counts as two Prowess triggers, with a board containing multiple Prowess creatures it can represent more damage than Lightning Bolt.

Wild Slash is a new addition to the deck, having replaced Burst Lightning in my list. Both essentially fill the same role of a 2 damage burn spell, but I’ve found it was a lot easier to trigger Ferocious on Wild Slash than it was to produce 5 mana to Kicker a Burst Lightning.

The refuel spells of this deck will replace themselves, drawing a card or flipping two cards that you can play from exile in Light Up the Stage. These spells are supposed to enable as many Prowess triggers in one turn for a big attack. 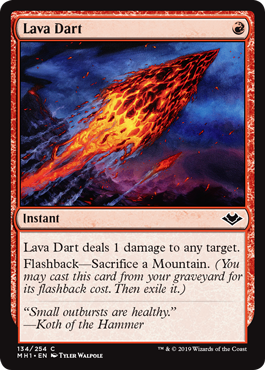 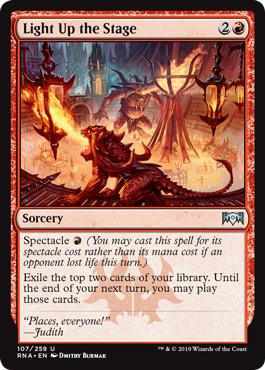 As this a very aggressive deck with cost reductions for the expensive cards, most hands are operational with two lands.

The mana base is simple, six Fetchlands that find Mountain (Arid Mesa, Bloodstained Mire, Scalding Tarn, Wooded Foothills), to find the Steam Vents or Basic Mountain and thinning your deck.

Fiery Islet not only fixes your mana but can be traded in for another draw, in a turn of a critical attack, giving you another chance to draw the lethal spell.

Spirebluff Canal is a fantastic land for any aggressive deck, providing both colours without taking any damage in the first few turns, you’ll also find in this deck that you can often play one untapped later in the game, due to the ability to sacrifice your lands, whether it be a Mountain to Flashback Lava Dart or Fiery Islet to its own ability. 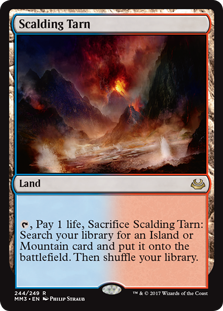 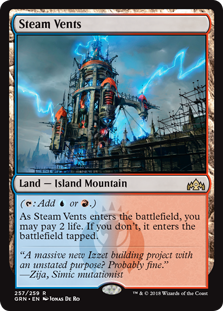 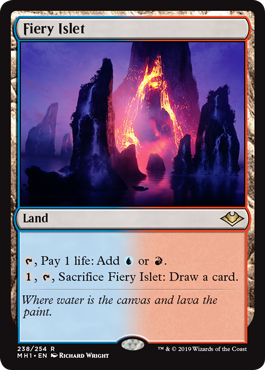 Ideally, you play one of your one-drop creatures on your first turn. If you have both, it’s better to lead with Soul-Scar Mage as the Haste on Monastery Swiftspear means you can potentially swing with them both on the second turn, with a spell to trigger Prowess on both of them.

Your second turn should also involve playing another prowess creature if you have a Phyrexian spell or Manamorphose. Stormwing Entity is the best play on turn 2, otherwise, another one-drop Prowess creature or Sprite Dragon are great plays to set up a big attack the following turn.

Usually, on turn two, you’ll also be able to poke your opponent with your one-drop or even dig for another Prowess creature through an Opt or Light Up the Stage.

With the right setup of early Prowess creatures in the first two-to-three turns, backed up with the right combination of spells, this deck can win on turns four to five consistently.

Against slower decks, your first few turns are vital as you want to pressure their life total while they are still setting up. As you are unlikely to compete in the late game, you are hoping to put them in range to be finished off with a final attack and a few burn spells.

With this game plan in mind, here are the considerations for hands to keep and mulligan. An ideal hand would look something like Soul-Scar Mage, Manamorphose, Stormwing Entity, Spirebluff Canal, Scalding Tarn, Gut Shot and Light Up the Stage. Here is the how this hand would play out:

Turn 3: Paying life, cast Gut Shot targeting the opponent, cast Light Up the Stage, playing what you can off it and attack with Stormwing Entity and Soul-Scar Mage.

Assuming you saw no other spells from Manamorphose, your two draw steps, and the Light Up the Stage, you would still have dealt 11 damage with just the cards in your opening hand. Any spell on the third turn would be amplified by the two Prowess creatures in play.

Upon drawing your opening hand, you should look for a balance of cheap Prowess creatures, spells and lands. Using the above hand as an example, 2 Prowess creatures that can be played in the first two turns, 2 lands and 3 spells would be an ideal hand.

As the synergy between creatures and spells plays a key role in the damage of the deck, a mix of both would maximise that output. Any hand with more than three lands is a mulligan, as this deck operates efficiently with two lands, a hand with double that is too many. Other hands to consider mulliganing are those with just spells and no Prowess creature. With no creature to benefit from casting spells you lose out on damage and by the time you do draw a Prowess creature, chances are you’ve run out of spells.

I am constantly changing my sideboard, but the cards that remain constant are Abrade, Surgical Extraction, and Blood Moon.

As a Chalice of the Void can counter the majority of your deck, Abrade is a great way to shatter this troublesome artifact, the option to deal three damage also brings flexibility into your board.

Surgical Extraction is my go-to graveyard hate for this deck. Alternatives include Relic of Progenitus or Tormod’s Crypt. I prefer the ‘gotcha’ element of Surgical Extraction, whether it be exiling a spell that Snapcaster Mage is targeting, getting rid of Uro, Titan of Nature’s Wrath for the rest of the game, or even just surprise triggering Prowess.

With the insurgence of Field of the Dead in the metagame, and the looming threat of lands like Valakut, the Molten Pinnacle, Urza’s Tower, Power Plant and Mine, one of your only interactions is through Blood Moon, turning those lands into Mountains. While these decks can certainly combat Blood Moon, it can buy you some time to inflict the last points of damage required. 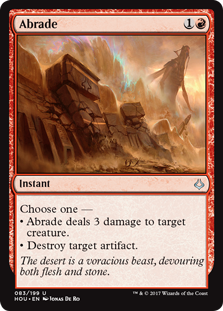 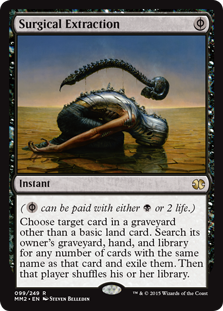 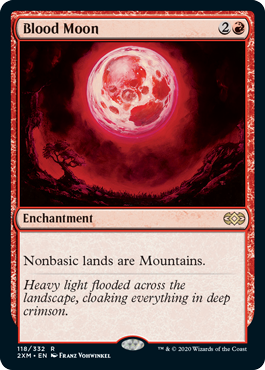 I don’t think it’s a stretch to say this is one of the strongest decks in Modern. I’ve certainly found success with it in the Modern events at my local Good Games store. I believe it is well-positioned in the metagame, which consists of Uro, Titan of Nature’s Wrath decks.

If attacking and playing spells is what you want to do in Modern, I wouldn’t look past Izzet Blitz.

With Zendikar Rising releasing soon, there are a few cards I’m excited to try in Izzet Blitz: 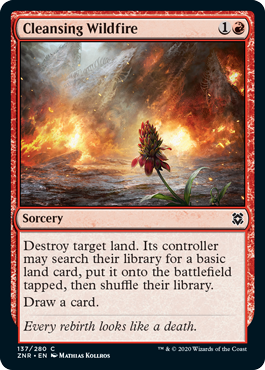 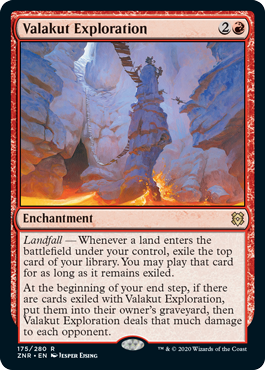 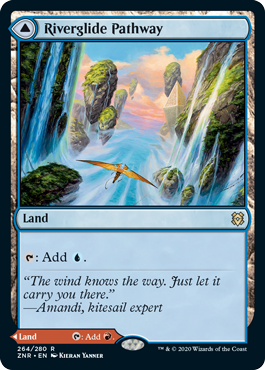 The first is Cleansing Wildfire, this is another tool to help interact against the land decks in the metagame. Costing only 2 mana is significant, as it means you can destroy an Urza land on the draw and avoid facing a turn 3 haymaker in Wurmcoil Engine or Karn Liberated.

This also destroys any Land, including Basics, which means this can destroy the land Utopia Sprawl or On Thin Ice is enchanted onto. Being able to replace itself by drawing a card means it will still be relevant if it is drawn later, triggering Prowess and the opportunity to draw into another spell.

Valakut Exploration is a card that can be used against the midrange and control decks. Although Blitz plays 18 lands, 6 of those are fetch lands which means you can trigger this card twice. Having up to two additional looks for spells against a slower deck can result in some explosive turns. If you are unable to play the cards off Valakut Exploration, the cards do return from exile to your graveyard and deal damage equal to the cards that were returned. As the wording states each opponent, this works around cards like Leyline of Sanctity and keeps the pressure on.

The final card that caught my eye in Zendikar Rising is Riverglide Pathway/Lavaglide Pathway. A Land that can produce either Blue or Red untapped at any point of the game. The card that I would experiment replacing one to two copies of with this is Spirebluff Canal.

Spirebluff Canal entering tapped on turn 4 or due to an early Path to Exile can reduce the deck’s explosiveness by not being able to cast all the spells you have access to. I suspect Lavaglide Pathway will be the more common choice given the deck’s colour ratio. However, with blue cards in Opt, Stormwing, and Sprite Dragon that are often crucial to play, having Riverglide Pathway as a painless untapped source of mana may prove valuable.