Core Set 2020: Under and Overrated

Players old and new were clamoring to return to pure, unadulterated Magic after the complex chaos of War of the Spark and Modern Horizons. Core Sets have always been a way to introduce Magic to new players, but recent iterations have had a little something for everyone!

M20 was no exception, with vanilla creatures, evergreen mechanics and creature removal rubbing shoulders with game-ending bombs and complex interactions.

In this article we’ll take a deep dive into what worked and what really didn’t on Prerelease weekend, in Over/Under(rated) cards from M20! 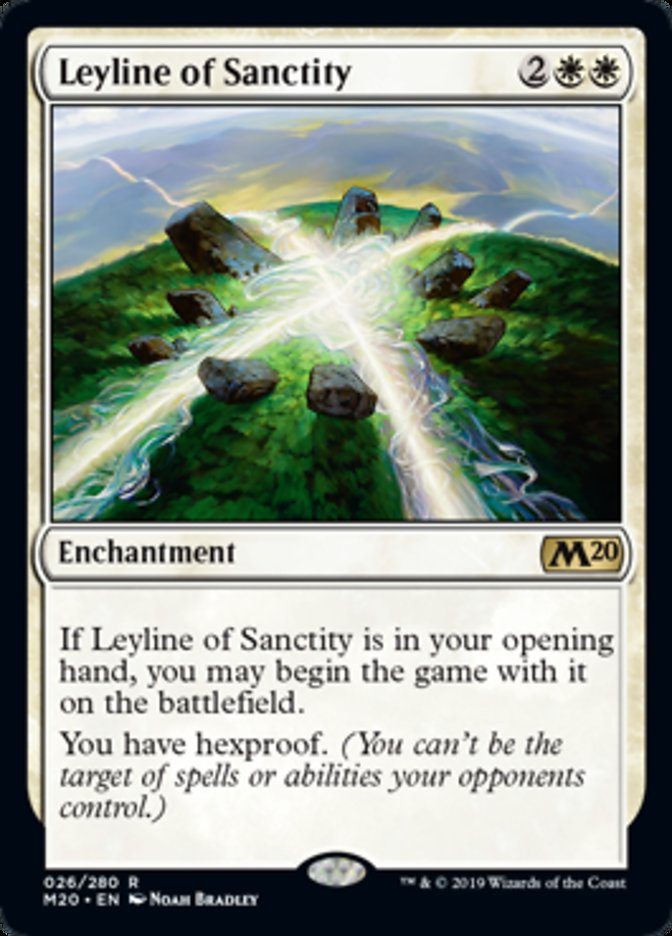 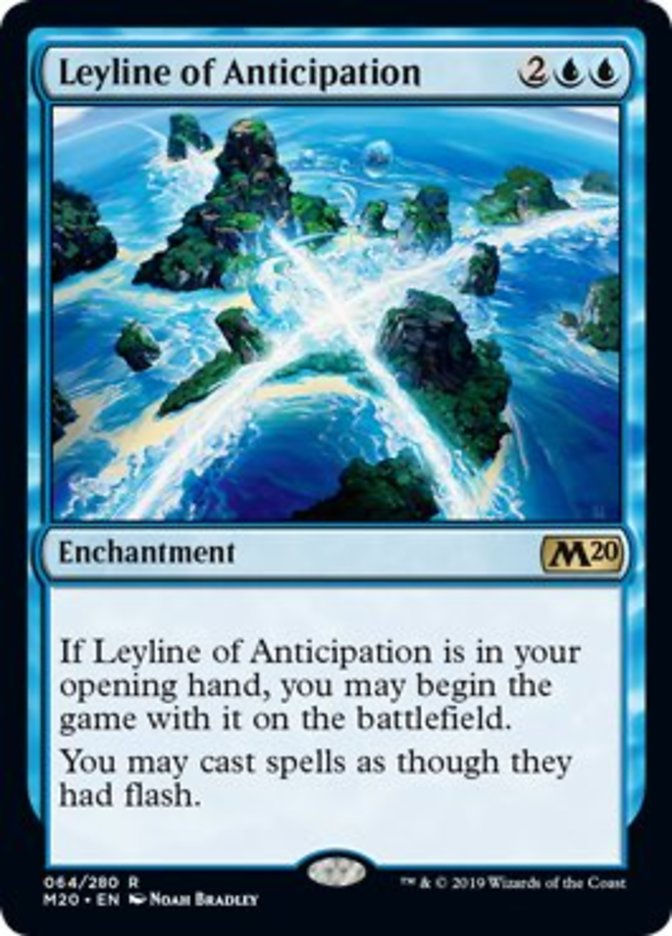 After playing a few people this Prerelease with any of the 5 Leylines in their deck, I endeavoured to truly and comprehensively lay out why these cards should stay out of your deck. Each of the players disagreed and laid out the cases in which they are great, some of which came up during our game!

The Leylines can be game-breakingly good in Constructed because they ‘hose’ (aggressively counter) particular strategies. A Leyline of Sanctity starting in play against Mono-Red in Standard can make them lose on the spot, as Lightning Strike, Shock, Viashino Pyromancer, Risk Factor, Wizard’s Lightning and friends can no longer aim at the player, leaving them dead in their hand in particular matchups.

A Leyline of Sanctity in Limited? It’s possible your opponent has zero to two spells or abilities that target a player, and you may not even have your Leyline in play by then!

Sure, their Mind Rot or Gruesome Scourger won’t work, but it cost you a whole card in order to possibly nerf zero to two cards in their whole deck. And that’s if you draw it at the right time.

Leylines are a great example of results-oriented-thinking warping your perceptions of particular cards.

A young man that beat me on the weekend insisted that Leyline of the Void was good, as he had lots of cards in his deck that interacted with the graveyard, or triggered when they died. I flipped my deck over and showed him that I had only one card that had a ‘dies’ trigger!

We lost a Two-Headed Giant game later to Leyline of Combustion, as our removal in the late game would have dealt us too much damage. In this case, it did happen to stop us from winning the game, but it always comes at a cost of it being completely irrelevant in every other situation! 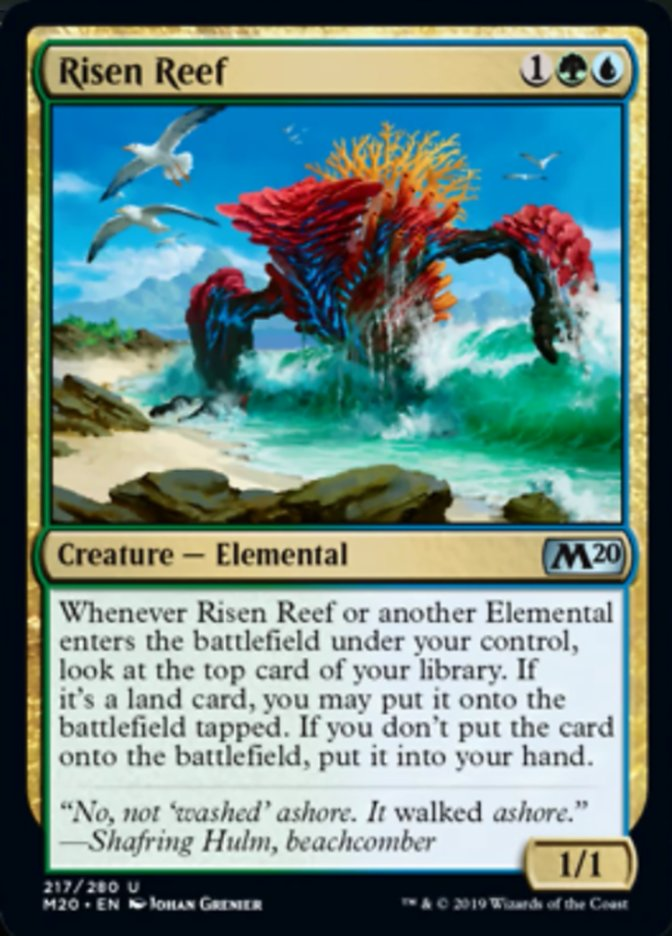 This card is making… waves in Constructed already, as people have recognised it as the Elemental deck’s Rogue Refiner.

This blue-green creature looks unassuming on the surface, but beneath lies a razor-sharp card advantage engine that will bury your opponent in value. In Limited, this card doesn’t require a huge amount of help to take over the game, even in Sealed. Every Elemental in your deck either ramps your mana or draws a card, and even if you only get a few cards out of it, your opponent has to prioritise killing it lest you draw into even more! I will look to take this early in Draft and as many Scampering Scorcher as I can pick up. 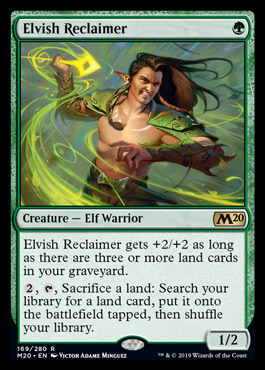 I tried this guy out a bunch in my three-colour decks on Magic Arena, and was constantly disappointed by how slow it was.

Searching out Temple of Triumph or some such to fix my mana and get a scry seemed worth it, especially if I invested into making it a 1-mana 3/4 . This still ended up feeling glacial and only something I wanted to pay for if I had literally nothing else going on. I watched a few people playing this in a two-colour deck, and it just never ever seemed worth the time and effort, even with an Evolving Wilds or two!

Leave this one in your 3+ colour decks that really need the fixing, or just relegate it to Constructed.

Underrated: Scholar of the Ages 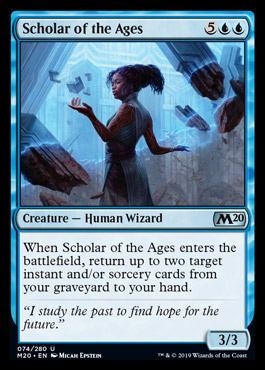 Speaking of arduously slow, Scholar of the Ages is everything that Elvish Reclaimer is not in the power camp.

This is an incredibly grindy but consistent way to win the game, and Scholar of the Ages is the linchpin. This also works with other sweet cards in the format like Pulse of Murasa and Blood for Bones so keep your eye out for this sweet loop! 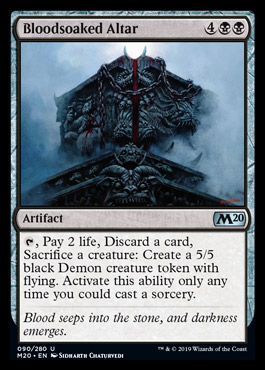 Bloodsoaked Altar reads like an easy way to put yourself down a bunch of cards, in exchange for a demonic pact that can be undone with a simple Unsummon. The format is shaping up to be quite a slow and grindy one though, so turning your excess tokens on board and cards in hand into value is paramount.

The life payment and discarding cards aren’t the worst, as this only shapes up in the late game anyway, and upgrading a creature into a 5/5 Flying is a great way to win the game. It even gets around Pacifism and Sleep Paralysis by being able to sacrifice the Demon with the enchantment on it! 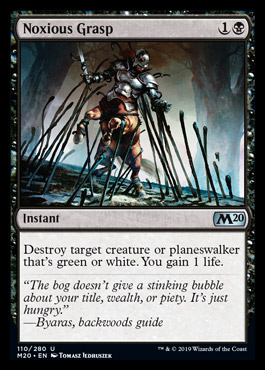 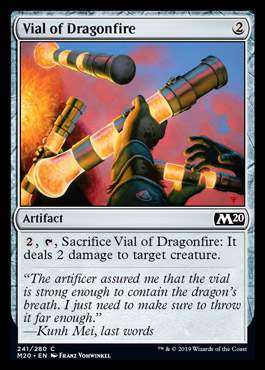 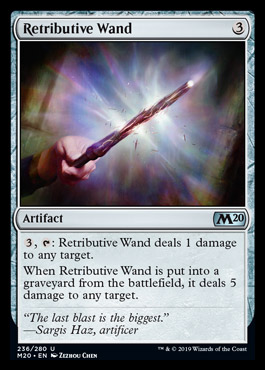 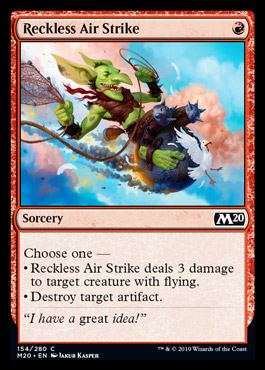 In the last few years of sets, sideboarding has not been as diverse or interesting as they are in M20. There are two cycles of cards; Noxious Grasp et al. and Shifting Ceratops et al., that underperform in main decks, and can be your best creature or removal spell post-sideboard. Look to cut cards that don’t perform too well in the matchup (2/2s against your opponent’s bevy of 2/3s, late game durdle creatures that run into your opponent’s counterspells) and replace them with these powerful options.

Reckless Air Strike and Plummet are other fantastic options to play out of the sideboard against the blue/white/red fliers decks, and Reckless Air Strike even has the option of blowing up a pesky equipment in a pinch. I’d still be wary of playing these in your main deck though as there are definitely some black/red/green decks that will have 0-2 fliers only.

Retributive Wand is a Rod of Ruin with an impossible upside (maybe targeting your own one with Reckless Air Strike?), but if the format shakes out to be as slow and grindy as this, it could be just what you need to  put yourself ahead in a long game. Pinging your opponent’s x/1 fliers and utility creatures like Risen Reef is useful, but also messes with combat, giving your creatures a pseudo-extra point of power. It can also start hitting them in the face for those last points of damage in a board stall, so don’t discount this little wand! 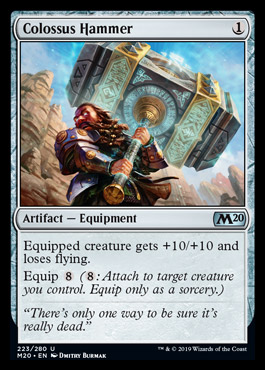 While the art, flavour and general vibe of this card are hilarious and intensely thematic, this isn’t a fantastic way out of a board stall.

Expensive equipment in the past have overperformed in slow formats, as they give you something to stick on your 1/1 evasive creatures to finish out the game, where Colossus Hammer specifically removes the best bit of using equipment. This card should only be used in niche situations with lots of Trample, as it ends up being too easily chump-blocked or returned to your hand, and you got no return on your 8 mana.

Back into our hearts and minds from being a powerhouse in Modern Affinity decks, Steel Overseer has been quite impressive so far in the format.

Steel Overseer is another card that received a boon from the format being so slow, being a constantly growing threat for the low price of two mana. It requires an answer eventually, which makes up a little for the fact that it isn’t the most fantastic topdeck in the late game. It’s colourless which helps with draft picks, and can be a super powerful win condition by itself, and that’s not even counting having a Prismite or a Anvilwrought Raptor in play.

Do get in touch with 7LandHand on Facebook, Twitter or Instagram, if you have any opinions/agreements/disagreements with my M20 over/underrated, and don’t forget to go play some M20 in a Good Games store near you!