On The Horizon: An Amazing New Era For Modern!

Modern Horizons is one of the strangest, most powerful sets to be released in a very long time, and we aren’t far away from seeing its potentially huge impact on the Modern format. Cards in MH1 are looking to be a perfect mix of power, nostalgia and just plain weird, which is fantastic!

Let’s look at cards bound to make an impact in Modern first! 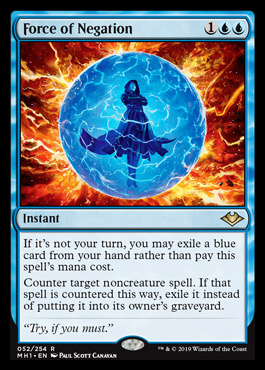 Force of Negation is the most powerful of the new Force cycle, based on Legacy and Vintage staple Force of Will.

While Force of Will is a ubiquitous addition to almost every blue deck in those formats, the Force cycle in Modern Horizons isn’t looking like they’re going to be as popular. While still powerful, they hold many restrictions- and are far more narrow in their application. Force of Negation is a powerful sideboard option, but maybe not a strict 4-of as some decks run very little noncreature spells. The downside of only being able to cast it for ‘free’ on your opponent’s turn also means that it’s less useful in counter wars that happen to land on your turn- so the hype for this card is maybe a little higher than it should be.

Still, it’s going to be hard to predict your opponent sniping your important combo piece or powerful Planeswalker when they’re fully tapped out. 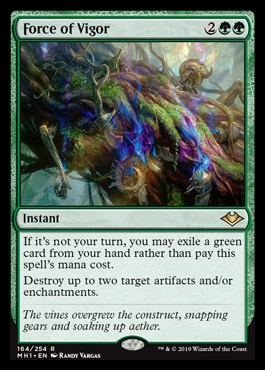 Force of Vigor is another hugely powerful sideboard card for Modern, but potentially reaching into Legacy, Vintage and Commander, too.

In those formats, games are often dominated by powerful artifacts and enchantments like Chalice of the Void or Blood Moon, and giving Green decks a way out of those locks without paying any mana is a huge boon. Expect to see a lot of this card over the next few years. 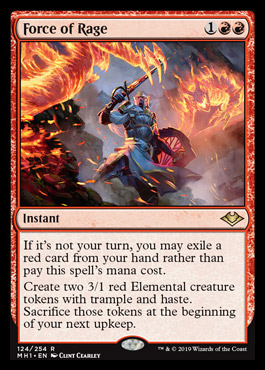 While we’re on the hype train, can we also board the tripe train and talk about how poor the Red Force is?

What on earth were they thinking when they made this card? I don’t know what Red deck is so poor for 3/1 Trample blockers on their opponent’s turn that they want to exile another spell from their hand. On the offence, there are much more efficient ways to push through damage.

This is trying to do a Ball Lightning impersonation spread over two bodies, but I don’t think anybody is going to be playing this card in the near future. 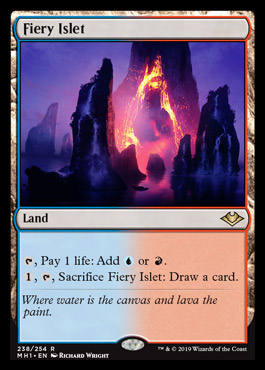 One of the most exciting sets of cards in the set are the new ‘Canopy’ lands, named after their great-grandfather Horizon Canopy.

While Horizon Canopy was part of a cycle of lands that were specifically designed to be different- Fiery Islet and the others are a full set of enemy-coloured versions. Changing your lands from resources into cards when flooding out is a huge addition to decks that don’t have high mana curves, and these will give a variety of decks reach into the late game.

I’d pick up sets of these before their price goes through the roof: Horizon Canopy was about $100 before its Iconic Masters reprint. 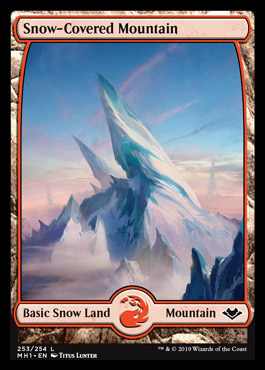 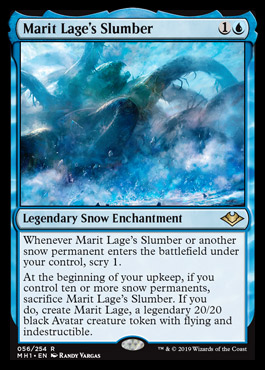 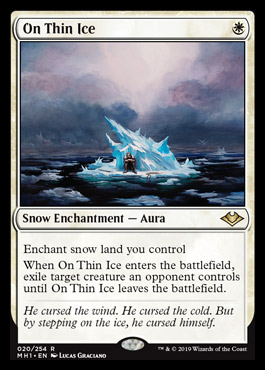 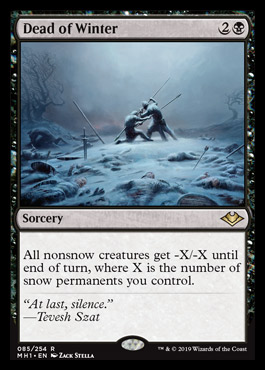 While the art choices on the full-art Snow basics are a little muted for my liking, bringing a bunch of these back into rotation along with a whole bunch of Snow payoffs is a fantastic way for Wizards to get people interested in building Snow decks.

Skred was already enough of a reason for Snow control to exist, so looking at Marit Lage’s Slumber, Dead of Winter and On Thin Ice only makes me think that there’ll be more Snow-related control happening over the next few years.

Quiet speculation as well- on the shortlist for Magic planes to visit is a Nordic/Winter themed set, as we haven’t seen one of those in a while. Snow decks in Standard wouldn’t have been able to handle cards of this power, potentially, so if they wanted to seed a sweet Modern deck around Snow, this is the way Wizards would want to do it! 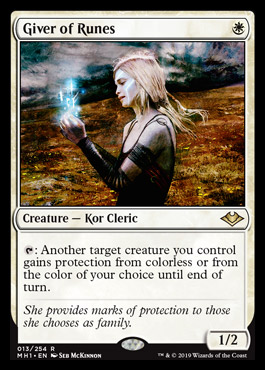 White Weenie hasn’t been viable in Modern for quite a while, but Wizards seem quite keen to bring it back in force. Giver of Runes is our replacement for Mother of Runes, potentially because giving itself protection and being a Human would have made it slot right into one of the most powerful Modern decks already: Five Colour Humans. Giver of Runes is still a pretty powerful effect, but only time will tell if it’s enough to make non-Human White Weenie a viable deck again. 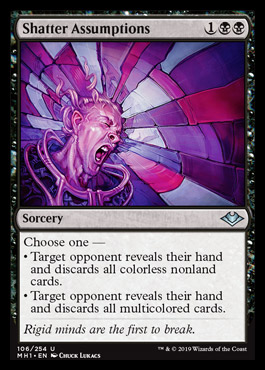 One of the previous banes of the Modern format was Eldrazi, powering out huge colourless creatures using Eldrazi Temple and Eye of Ugin. The deck was so powerful it warranted a ban all by itself, with Eye of Ugin getting the chop. The deck isn’t dead though, as Thought-Knot Seer and Reality Smasher are still powerful, disruptive plays that are hard to deal with.

Cards like Shatter Assumptions pull far above their weight as a sideboard card, as they disrupt the powerful Eldrazi deck’s hand, while also being a potential option against Tron, Affinity and any deck that happens to rely on Colourless cards. 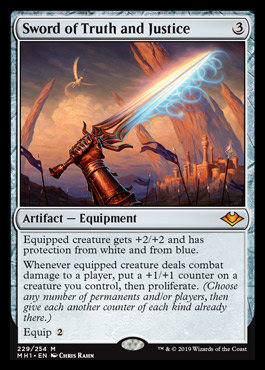 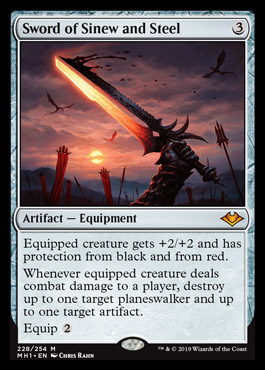 Looking to Commander playables now- I never thought they would find a place to complete the Sword cycle (that started with Sword of Fire and Ice and Sword of Light and Shadow) as it’s been many years since cards of that power level have been printed in Standard.

Turns out that Wizards were aware of the clamour for cards like this, and are using Modern Horizons to inject sweet cards directly into the format. While the other three colour paired swords aren’t in this set (bring on Modern Horizons 2!), these two take a modern Magic design look at the iconic cycle. Sword of Truth and Justice will fit in every Commander Super-friends deck for the rest of time, and Sword of Sinew and Steel is just an all-round value card that will see play in a wide variety of decks. 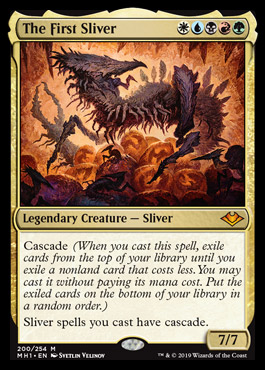 The First Sliver is one of the many options for a Commander for your Sliver army/deck, and may potentially be one of the most broken.

There aren’t many spells that have Cascade, but the most dangerous ones were always those that could trigger more Cascades. If you cast a Sliver after you have already played The First Sliver, you have the potential for each of the things it Cascades into Cascading into yet another Sliver! This one is going to be a hugely fun card to play with, as Sliver decks always end up in a chaotic keyword soup, and this one just increases your board presence exponentially.

Expect this one to be in high demand, and foils to be astronomically priced for the foreseeable future. 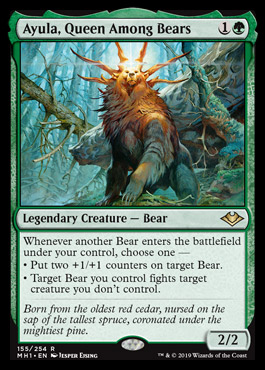 Ayula, Queen Among Bears is only our second Legendary Bear of all time, and this one finally cares. About all bears. Looking at you, Goreclaw, who only cares about large bears.

The majesty of this card is unparalleled, and I expect to see many casual Bear Modern decks and Commander decks built around this beautiful beast. 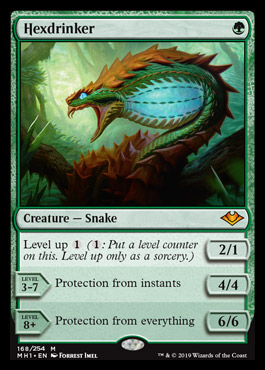 This is my personal favourite card in the set, and is unfortunately the only Level Up card!

I loved Rise of the Eldrazi as a draft format, and this brings back many fond memories of leveling up my creatures. This little snake starts out strong as a 1-mana 2/1 and in the late game can turn into the mini Progenitus of your dreams! What a sweet little card.

Watch out for Diabolic Edict.

Finally, I’m going to talk about my favourite Magic references in Modern Horizons: Designed as a Time Spiral/Future Sight style set for deeply enfranchised players, the set was only given the Modern design spin late in the development cycle.

As such, there are lots of hidden Easter Eggs in the designs, abilities and art of the set. 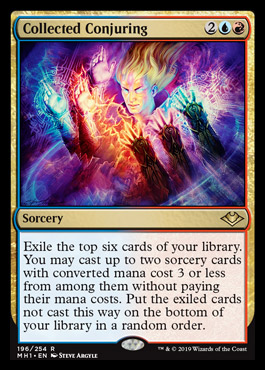 It’s Collected Company… for spells! It’s definitely harder to win the game with two cheap spells than two cheap creatures, but I’m sure people are going to try break this. 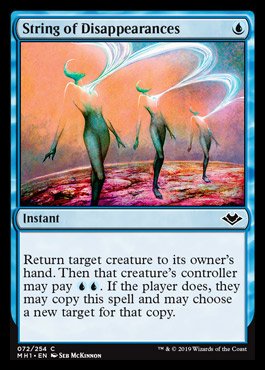 It’s Chain Lightning… but fixed so it’s not completely broken in Modern Burn! 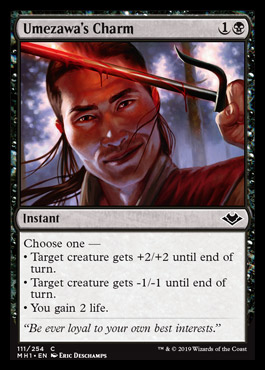 It’s Umezawa’s Jitte, but only one time, and still quite good in Limited!

God, that card is busted. 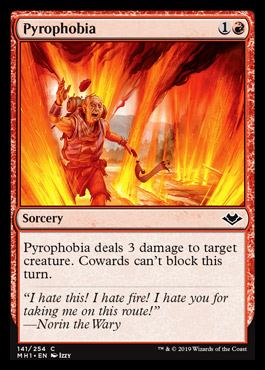 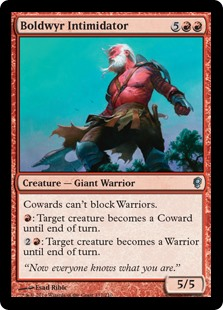 There aren’t many cards that reference the creature type ‘Coward’, but weird Lorwyn card Boldwyr Intimidator does!

Also in this format, don’t forget that Changelings are all creature types- including Coward! 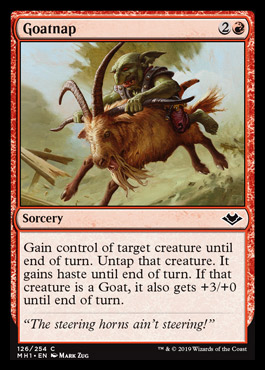 All Changelings are also Goats, that you can Goatnap. 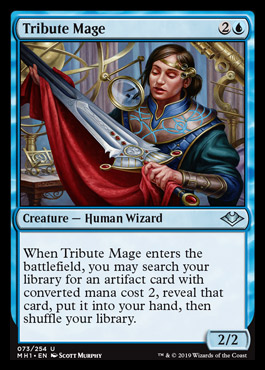 When will it end? Surely Wizards are running out of words that start with ‘Tr’.

Trumpet Mage is up next. 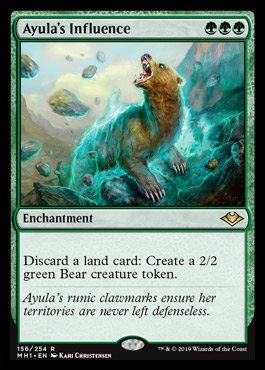 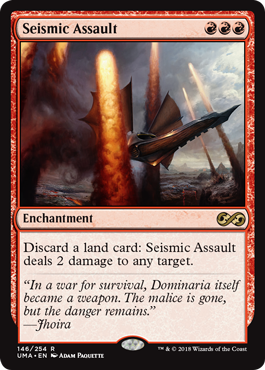 Also very keen to see what the rest of this cycle looks like.

Modern isn’t the only place Modern Horizons is going to make a splash- with a fresh, complex-looking Draft format and some amazing cards to add to Commander, this won’t be a set to miss out on!

Modern Horizons prerelease is this weekend! Contact your local Good Games store today to make sure you don't miss out on the fun- and be sure to get yourself a booster box or two!